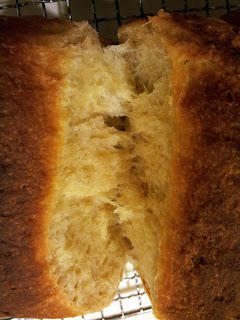 During my searches for bread receipes, I came across a term "tangzhong", and usually from Asian blogs. The tangzhong method is said to produce soft, shreddable bread and was made popular by a Taiwanese book, Bread Doctor, by one Yvonne Chen. In English circles, this method is known as the "water-roux" method.

Since the tangzhong method produces soft bread, which my mother likes, I thought I would try substituting some white flour with wholemeal flour. 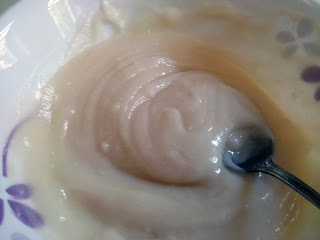 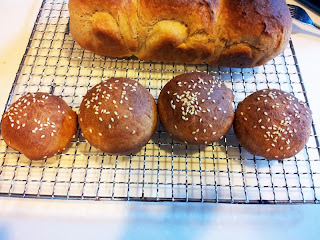 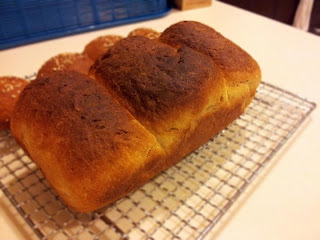 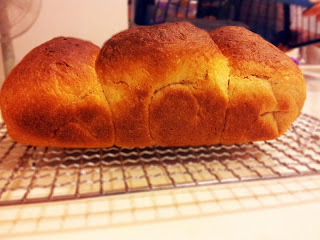 The whirly sections look kind of funny because I was not very good with shaping. It also turned out a little low, because I got so excited about putting the loaf in the oven right after shaping that I forgot to let it rest and rise further. 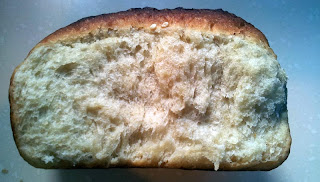 This is what a torn-apart section looks like. To me, it looks quite soft and cotton-wool like. Now imagine it 1,000x bigger... what a great bed it would be to jump on and sink into! 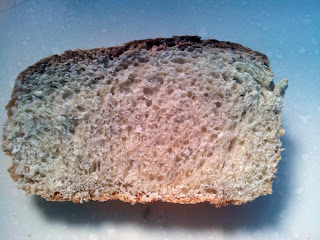 And this is what a sliced section looks like. Alright crumb, but not as pretty as a torn-apart section :)


2. Transfer the mixture to a saucepan and stick a thermometer in it, while heating it over gentle heat and stirring it. If you do not have a thermometer, that is alright - you will want to look for the magical swirls or lines that appear when you stir. Alternatively, you can try microwaving it for intervals of 10-20s and stirring it in-between till the swirls appear.


3. Once the thermometer hits 65C or once you see the swirls / lines, stop, because your tangzhong starter is ready. Take the saucepan off the heat and pour the starter into a clean bowl. Cover it with cling wrap and allow it to cool. You can store the tangzhong starter in the fridge for about two days, but note that if it turns grey in colour it may have gone bad. (Note: Tangzhong left to ferment for 12 hours may taste better. Neither I nor Dodol & Mochi have tried this.)


1. Whisk the egg and milk in (C), then combine with the tangzhong.


2. Combine (B), making a well in the centre. Pour the (C) mixture into the well, and slowly combine them well till you get a dough.


3. Knead the dough a little for gluten development, then add in slivers of the cold butter and continue kneading till you pass the windowpane test. Wholemeal bread will take more kneading than white bread to pass the test.


4. Place the dough in a lightly oiled bowl. Cover it with clingwrap, and let it proof till it doubles in size.


5. On a lightly floured working surface, deflate the dough. Divide the dough according to the number of whirled portions you want your loaf to have (mine had three). Form each divided portion into a ball, cover and let them rest for 15 minutes while you lightly grease your baking pan. Pre-heat your oven at 200 degrees C.


6. Dust your hands and your work suface with flour. With each ball, flatten it into a rectangular shape. Then roll it up tightly and pinch the ends to seal it. Transfer the rolls into your baking pan, starting from the centre. Remember to leave some space between each roll for expansion. Cover lightly with cling-wrap and let the dough proof till it fills up 80% of the baking pan.


7. Slide the baking pan into the oven and lower the temperature to 180 degrees C. Let it bake for about 30 minutes, or till the bread looks golden brown. Then let it cool on a wire rack.