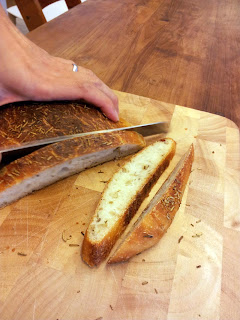 Again, it was cold and the dough was taking a long time to get to room temperature. Plus I was short on time. So I skipped a lot of rising / resting steps as prescribed by Peter Reinhart's Artisan Breads Every Day, and warmed the dough up in the oven to speed up rising. Despite my rushing, my kitchen was soon filled with the warm homely smell of freshly baked rosemary bread. It reminded me of the two years I spent overseas living in an apartment above Subway. 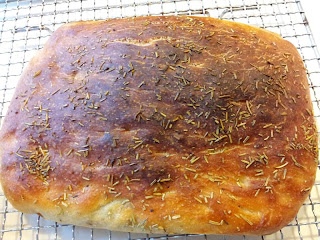 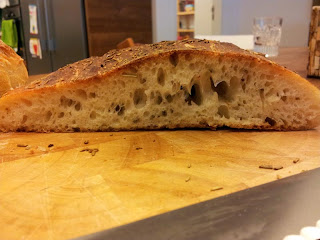 My focaccia had the lightness and chewiness of the ciabatta, but was slightly oily, with a hint of rosemary, and a crispy oily base. Compared to my 100% wholemeal rosemary focaccia, the scent of rosemary was much weaker, perhaps because it did not spend as much time out of the fridge resting.

Even though I tried to flatten the focaccia as evenly as possible and dimpled it using my fingers, it puffed up a lot. Its crust was a bit harder than that of the 100% wholemeal rosemary focaccia, and much harder compared to Gardenia's focaccia. But you will see in my next post Nancy Silverton explaining that soft, dry, herbed foccacia is the Americanized version of focaccia, whereas authentic Italian focaccia is like crusty ciabatta with more olive oil and pizza toppings.

Although the children seemed to prefer the ciabatta, one of my cousin's Palestinian friends could not stop eating the focaccia, and at the end of the lunch even sliced a hunk to bring home!

Submitted to YeastSpotting
Posted by Wild Child at 1:01 pm