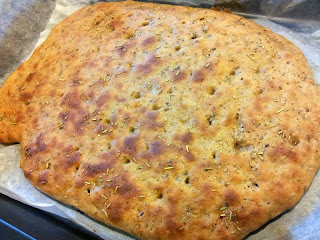 After a long week at work, I was eager to do some baking - my new stress relieving activity. So far I had baked just ordinary wholemeal sandwich loaves and wholemeal cinnamon swirl bread for mom. I wanted to try some other kind of western bread. After leafing through Peter Reinhart's Whole Grain Breads

, I settled on giving his whole wheat focaccia receipe a shot. 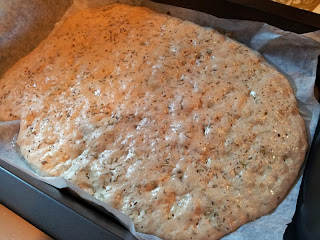 Letting the dough rest before baking


While preparing the focaccia dough, I was definitely worried that the focaccia would turn out dense and unpalatable, as wholemeal is chewier and cannot rise as well as white flour. But the results were astonishing. As you can see from the two pictures below, the focaccia had lovely air holes throughout and had a great, soft texture. 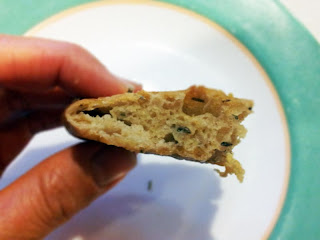 Cross-section of a small corner 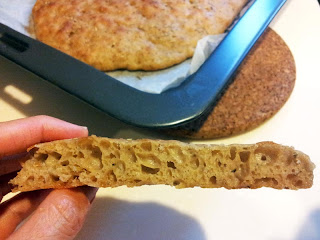 Cross-section of a slice 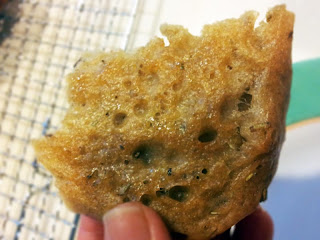 Bottom of a small corner


Peter Reinhart's receipe does not mention it, but I kneaded some garlic powder and dried rosemary into the dough, and while letting it rest I added more dried rosemary. As the dough baked, a lovely scent of garlic and rosemary filled the kitchen. The focaccia definitely carried the rosemary in taste, but I barely detected any taste of garlic eventually. It was delicious enough to eat on its own, although I could imagine people dipping it in olive oil and/or balsamic vinegar.

Method
1. Place all the ingredients except the extra wholemeal flour and olive oil in a bowl, and mix for 2-3 minutes. The dough should be sticky but smooth. Add the olive oil and mix for another 15 seconds, long enough to coat the dough. Let the dough rest for 5 minutes uncovered, then mix again for 1 minute. The dough will be stronger and smoother, but will still be sticky. If it is too wet, add some flour.

2. Line a pan with parchment paper and oil it with ~1 tbsp olive oil.

3. Transfer the ball of dough to the pan and rub the top of the dough with olive oil. Then use the palms of your hands to flatten it. Cover and seal the pan with plastic wrap or a plastic bag, and immediately refridgerate it overnight.

4. The next day, or within 3 days, remove the pan from the refrigerator 4 hours before you plan to bake the focaccia. Remove the plastic wrap / bag and drizzle ~1.5tsp olive oil on top of the dough. Use your fingertips to press out the dough, starting from the centre, and moving to all four corners, creating dimples in the dough as you press. If the dough starts shrinking back, stop pressing. Loosely cover the dough with plastic wrap and let it rest at room temperature for about 20 minutes.

5. Repeat the pressing and dimpling of the dough. Let it rest at room temperature for another 20 minutes, covered with plastic wrap.

6. Perform a third dimpling of the dough, and let it rest and rise for 2-3 hours.

8. About 3-4 minutes after removing the focaccia from the oven, transfer the focaccia to a cooling rack or cutting board. (But if you prefer a soft bottom crust, you may leave the focaccia to cool in the pan.) Be careful not to spill any excess olive oil on yourself - don't get burnt! Pour any excess oil on top of the focaccia. Let the focaccia cool for at least 10 minutes before cutting and serving.

Submitted to YeastSpotting
Posted by Wild Child at 2:56 pm